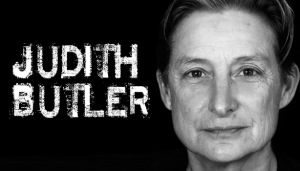 From April 5-7, 2017, the interdisciplinary Research Institute for the Humanities CLUE+ at Vrije Universiteit Amsterdam organises a three-day international conference on resonances of the work of the critical theorist and philosopher Judith Butler.

Critical Theory in the Humanities: Resonances of the Work of Judith Butler

The aim of the conference is to increase awareness of the relevance of critical theory for the whole of the humanities and to promote interdisciplinary thinking. The breadth of Butler’s work – touching upon questions of identity in philosophy, ethics, politics, religion, and the arts – can serve as a stepping stone for a fruitful intellectual exchange between the various disciplines. In this spirit, the conference will be supplemented with a number of student initiatives, including workshops, a graduate seminar, and a film programme. The conference will close with a performance programme at the Stedelijk Museum Amsterdam.

We invite contributions that engage with, or are inspired by, Butler’s critical thinking in all its facets, including (but explicitly not limited to) the following fields of inquiry:

We welcome submissions from established academics, early-career researchers, and doctoral students. Paper proposals of 300 to 500 words, accompanied by a short biography (100 words), can be submitted via our website before October 1, 2016. Acceptance will be announced by December 1, 2016. Paper presentations will be 20 minutes in duration. Proceedings are to be published with an international publisher. The estimated fee for participation is 100,- euros, plus another 50,- euros for an optional conference dinner.