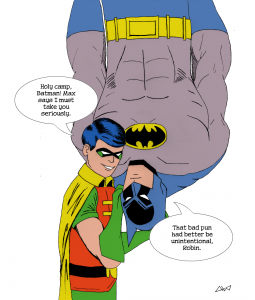 At his conception in 1939, Batman was positioned as the grim answer to an upbeat Superman: instead of an invincible superhero in bright colors, here was a mere mortal struggling with ethical dilemmas in a darkly drawn diegetic world. Later incarnations of Batman have been strikingly comical, however – think especially of the 1960s television series in this respect. Looking back on 75 years of Batman re-mediations, a push-pull dynamic between seriousness and silliness can be perceived, with each new installment attempting to move away from its predecessor’s supposed solemnity or triviality.