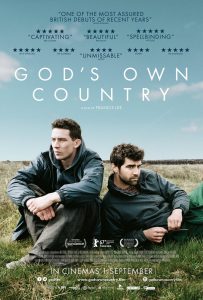 Set in rural Yorkshire, the film God’s Own Country (directed by Francis Lee, 2017) portrays a gay romance between local twenty-something Johnny and Romanian migrant worker Gheorghe. With Gheorghe’s help, Johnny learns to open up emotionally, appreciate the countryside, be kinder to farm animals, and accept technological innovations to run his father’s farm. As James S. Williams points out in “Queering the Cinematic Field” (2021), God’s Own Country thus trades on the trope of the savior migrant. In disagreement with Williams, however, I hold that this stereotypical portrayal of Gheorghe is not “directly linked” (Williams 77) to the film’s distribution of the gaze. In fact, following Murray Smith’s model of character engagement, I argue that gazing with does not necessarily entail agreeing and sympathizing with.