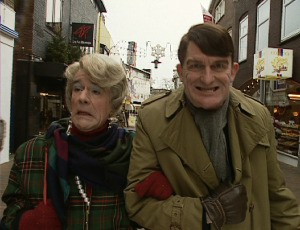 In the first half of the 1990s, Kees van Kooten and Wim de Bie appeared in twelve television skits as Carla and Frank van Putten, mother and son. Each installment follows a fixed plot development, in which Carla’s domineering behavior causes deep frustration with Frank. I investigate how these skits relate to Momism: a psychiatric and sociological discourse that ascribes a large number of “disorders” with men – including asthma, autism, homosexuality, and schizophrenia – to an incorrect upbringing by a mother who suffocates (too hot) or neglects (too cold) her son. Van Kooten and De Bie are commonly thought to make subversive satire. However, by way of a narratological analysis I show that, with the exception of the first two skits, the viewer is consistently invited to laugh at Carla as a bad mother.